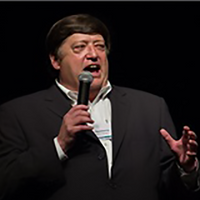 Danny began his 34th year in the industry in 2021. He graduated from Mississippi College, where he also attended law school.

He holds many accreditations and has been recognized by a multitude of carriers for not only his work, but also the growth and dedication of his agency, Rasberry Producer Group.

His background is diverse ranging from a political consultant to a concert promoter. During his young business years, he always read and could never put down financial books. Finally, he joined the industry in 1987 by becoming an agent with The Prudential in Biloxi, Mississippi.

Rasberry admits he was a colossal failure. “Looking back, I was one of those ‘one in a million’ that survived,” he said. It was when he started putting in place the marketing plans he learned from politics and music that made his practice jump. “Previous life experiences is what propel me from the bottom to the top,” he said. “Once I started believing in my ability to make things happen, they did!”

In 1990, he took over the worst producing staff in the country as a sales manager for The Prudential and within six months, the team was on “Citation” pace, an honor for the top staffs in the country. Even with those successes, his passion were qualified plans. He opened up his own TPA firm and left The Prudential. Within a short two months later, he was offered a position to develop a region in Mississippi for Northwestern National Life. NNL later became ReliaStar, which became ING. After years of having national success in the 401k and variable annuity side of the industry, Danny developed a strong passion for Indexed Universal Life. Now, Danny has led the RPG team to be leaders in the IUL industry.

“I’m a recruiter, absolutely. I’m always searching for great talent for this industry,” he said, “but what we are really about is developing that talent within and taking someone to the top!”

“I have worked with hundreds of agents across the country for over two decades,” he said. “It’s been an honor to have been a part of so many of their lives. I feel extremely blessed to have had a part of their successes. I consider our agents as family. Our goal is help each of them produce an exceptional life. I expect our primary companies to feel the same way about our team. You must have empathy in this industry and I’m very proud of the relationships we have in place.”

Some trivia about Danny:

I wish I could be more: Patient.  I can’t WAIT for TOMORROW TO ARRIVE!!!

I can’t live without: positive people!

In tough times, you will find me: developing a way to make it better!

Currently reading: Forever and Ever Amen: A Memoir of Music, Faith, and Braving the Storms of Life: By Randy Travis and Ken Abraham

Favorite saying or advice: If you want something bad enough, you will find a way to get it!